The medieval villages of Baix Empordà 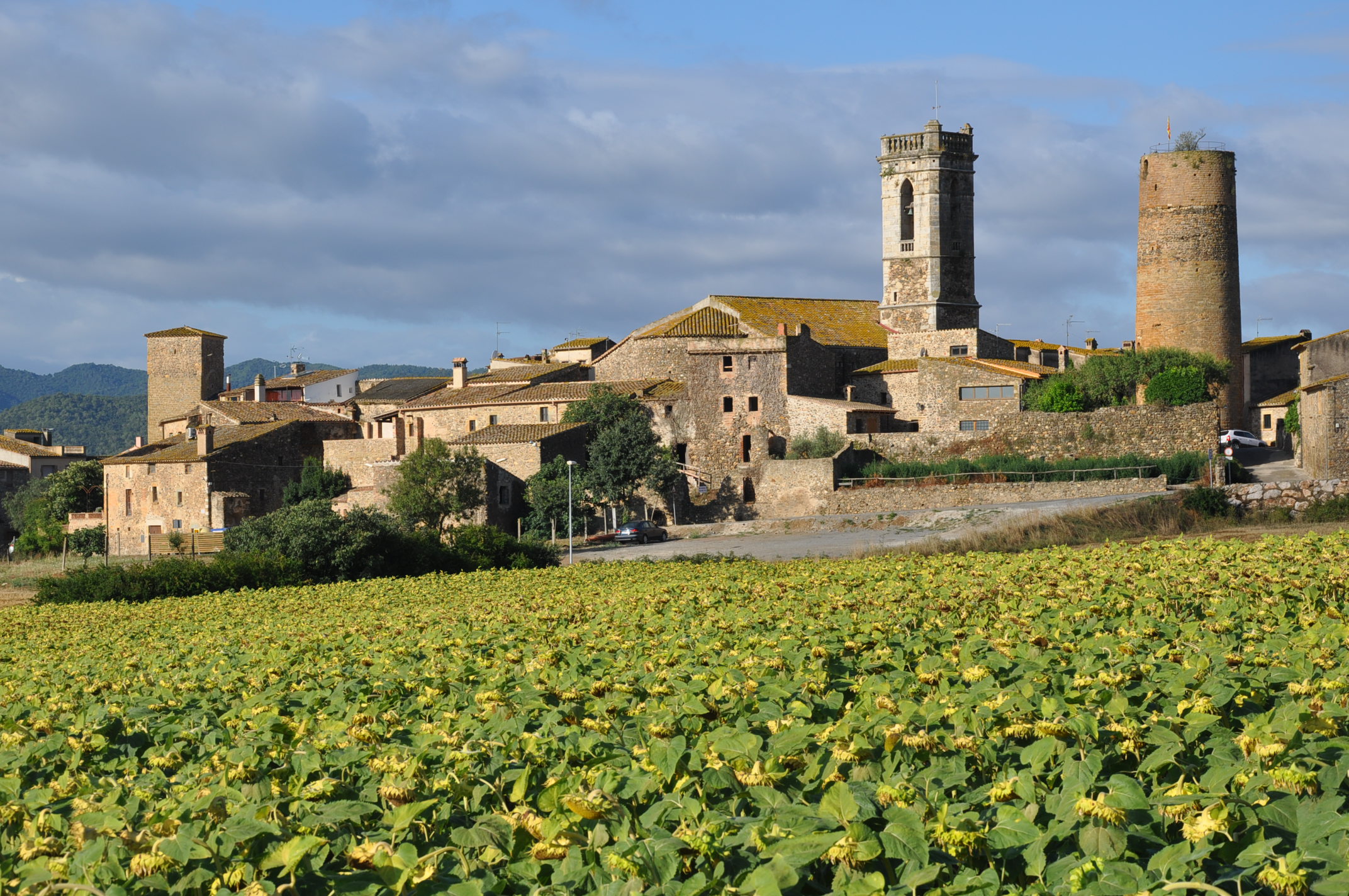 The Baix Empordà region is located in the northeast of Catalonia, bordered by the indomitable waters of the Mediterranean Sea and the imposing massifs of les Gavarres and Montgrí. It is a quiet region with incredible medieval towns where you will find ideal locations for your audiovisual project.

La Bisbal is the capital of the Baix Empordà, and there is a lot of life all year round. It stands out for its ceramics and its cakes. The uniqueness of the La Bisbal ceramic is that it is made with terracotta and some manufacturers still produce it entirely by hand – that is why each of their pieces is unique and special. Is such an artisan workshops in the city not an ideal location for a photographic shooting or audiovisual production?

The old town of La Bisbal is full of local shops and the Castle Palace of the Bishops of Girona is an architectural work of Catalan civil Romanesque. It is the most emblematic building of the city and one of its symbols. The old nucleus of La Bisbal also accumulates other patrimonial riches: the wall of the courtyard of the Castle Palace, the portal of the Rambla, the Old Bridge, the Call or Jewish quarter, the churches, Les Voltes, the El Mundo building of the early twentieth century.

Torroella de Montgrí still conserves parts of its walled enclosure, where the portal of Santa Caterina and the enigmatic tower of the Bruixes (witches) stand out, of what is said it was their usual meeting place. A mystical location for the audiovisual project you have in mind.

Four main axes come together in the Plaza de la Vila, a piazza of irregular dimensions where la Casa de la Vila and a large sundial are located. In addition, there are buildings such as the Mirador palace, the Solterra palace and the Quintana house of the 15th century.

It is also worth visiting the Gothic church of Sant Genís, the Sant Antoni chapel from the 13th century, and the Renaissance cloister of the Sant Agustí convent. Just north of the city we find the impressive castle of Montgrí, an unfinished fortification that was built in 1294.

Rupià is a fortified town that was declared a historic-artistic site due to the richness of its architecture. In its interior the medieval layout of narrow alleys and small squares is maintained, and the facades of the houses are rich decorated.

The only two gateways of the city, the Avall portal and the Amunt portal, are well preserved. In the center are the church of Sant Vicenç, a late Gothic construction with a baroque front; and the episcopal palace, a civil Gothic building, with a rectangular floor plan, ideal for locating your audiovisual production or photographic shooting. 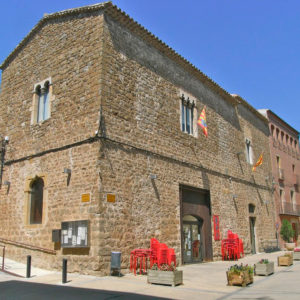 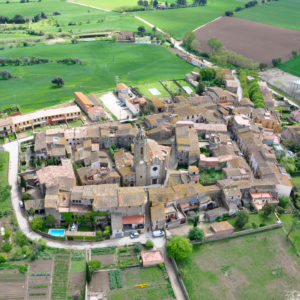 In any list of small, charming towns in Catalonia, Monells should not be absent. Monells is, together with Cruïlles and Sant Sadurní de l’Heura, one municipality. All three have essential locations for your audiovisual project.

The population of Monells would have developed around a primitive castle, now nonexistent. It was surrounded by a wall, of which some vestiges remain. The most intimate part of the city is the Plaza del Mercado, with its beautiful arches as arcades, one of the most beautiful porticoed squares in Catalonia. 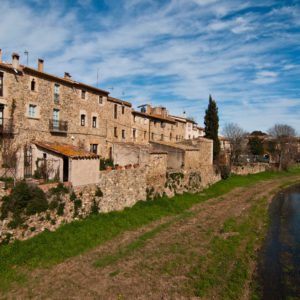 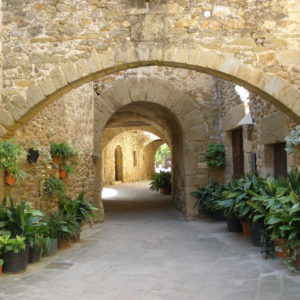 A few kilometers from Monells and, forming part of the same municipality, we find the town of Cruïlles. The medieval core of this small town is visited in a few minutes. Quickly you will be able to detect which is the location that you are looking for, for a photographic shooting or audiovisual production.

The most outstanding element is the Cruilles Tower, which is what remains of its old castle. It is a beautiful round tower, which can be found in the most important square of the town, next to the church of Santa Eulalia.

A little over a kilometer from the medieval center is the monastery of Sant Miquel de Cruilles, a beautiful Benedictine monastery, Romanesque in style and with a pretty Lombard decoration. 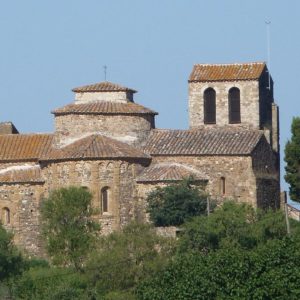 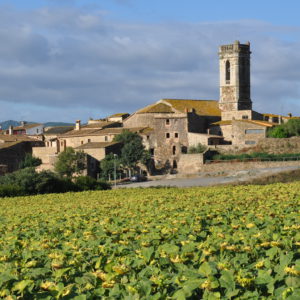 Peratallada is one of the most popular small towns in Catalonia, it is chosen by numerous couples as a place to celebrate their wedding. The most beautiful of the squares of Peratallada is known as Plaça de les Voltes. Currently it is still porticoed on its north side, although it seems that in medieval times it would have been porticoed on two or three sides.

In Peratallada part of the old walls, several watchtowers, some entrances to the town, such as the Bridge of the Virgin, with its double arcade, and above all the famous Peratallada Castle are a crowd of locations for your audiovisual project.

In the center of this castle stands the Homage Tower, visible from practically the entire town. It rises up to a height of 10 meters above its base of natural stone. The tower is topped by showy battlements. 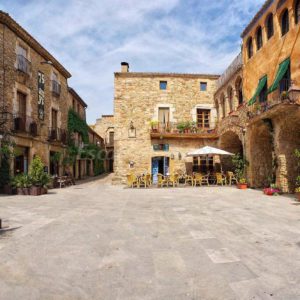 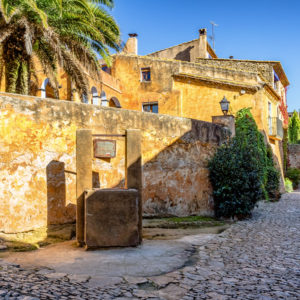 Vulpellac was also a fortified town in medieval times. Now we find only scattered remains of the old wall. We also find in Vulpellac the remains of two medieval circular towers and a tower with a rectangular base, in excellent condition, which represents the current entrance to the medieval center.

In the middle of the town is the old castle-palace, a beautiful building that corresponds to the civil Gothic, although with Renaissance elements. Worth visiting is also the adjacent church of Sant Julià and Santa Basilissa. Another charming medieval village with locations of all kinds for a photographic shooting or audiovisual production. 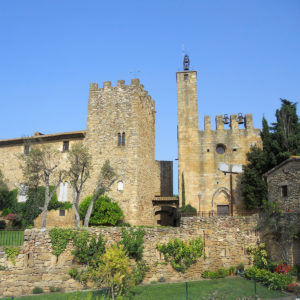 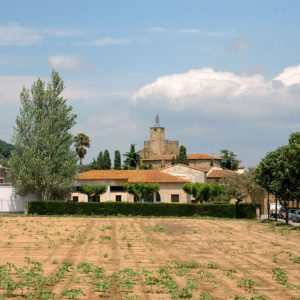 Palau-Sator is much less known. It has a small medieval core. However, its beauty makes it worthy of a visit, although it may be a shorter one. In the center of the town we find the Castle of Palau-Sator, an ideal place for your audiovisual project.

We can find remains of its wall, as well as some of its round based towers and one of its medieval gates, the so-called Tower of Hours, which has two clocks, one normal and one sundial. Right in front of the Tower of Hours there is a nice and practical construction: the public laundry. 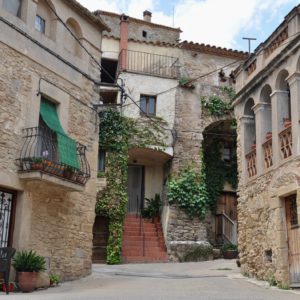 The medieval city of Ullastret conserves its walled nucleus. We enjoy the intramural city, built on a small promontory. The central square, where the castle once stood, is a highlight. Furthermore, in this square we find a beautiful church of Romanesque origin of the eleventh century, with a basilica plan with three naves.

The wall presents a perfect state of conservation, including up to 10 watchtowers, the majority of rectangular plant, but one of them shows a round plant and is well-known as the Tower of the Jail. Just outside the walls, we find the old Lonja or Pórtico Comunal, a building, like a porch, with a Gothic structure that could be used as a meeting place for the heads of the village family, or as a place for commercial exchanges.

In addition, it is home to an important archaeological site: the Iberian city of Ullastret. Both in the city as in the site you will find locations for your audiovisual production or photographic shooting. 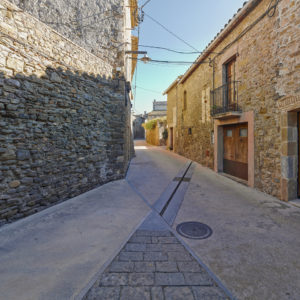 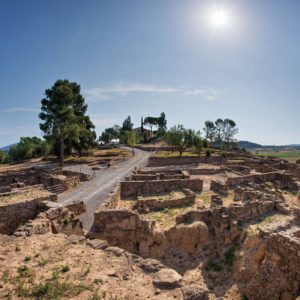 Although the medieval center of Pals, which rises on a promontory, was in the 40’s in a state of almost total neglect, nowadays we can enjoy strolling through this beautiful medieval site. It is known as the Gothic Quarter of Pals, full of narrow, cobbled streets, beautiful stone houses, slender medieval towers and ancient churches.

Do not miss the beautiful Torre de las Horas, the Tower of the Hours, with its circular base, which rises up to a height of 15 meters and is built on the top of a natural stone base. It is a unique fund for your audiovisual project.

It is necessary to take a detour through the walled enclosure in which five of its rectangular towers are preserved, enjoying the beautiful landscapes that can be seen from the viewpoint of Josep Pla. From there you can even enjoy the Mediterranean Sea, with the beautiful Medes Islands, located opposite the Estartit. 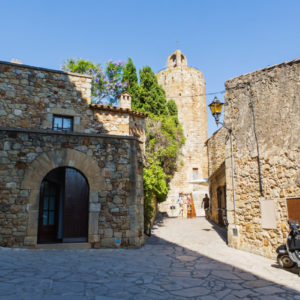 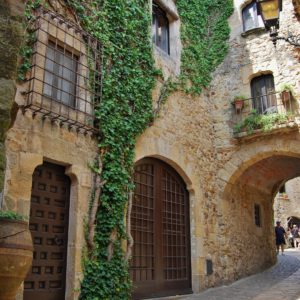